I had an unpleasant experience recently whilst out taking photographs.  I was photographing a carpet shop and when I was returning to my car a very large man ran up the street shouting at me.  I thought he must be from the carpet shop and was wondering why I had been taking photographs, but no.  He lived in the house next door and wanted to see what I had taken.  On the edge of my picture was a very small part of his house and he demanded I delete the image which I refused to do.  He became irate and threatened to ring the police, I told him to do so as I had a right to take pictures in the public domain.  When I said before he was very large I mean well over six feet tall and obviously a body builder, not overweight and half my age!  He started to intimidate me and barred my way when I started to walk away.  He threatened to follow me to find where I lived!  I was in a hurry to get home so to avoid any more unpleasantness I deleted the file.

Later that night I related the incident to the police who confirmed that I was not obliged to delete the image and that photographers can take pictures, without permission, of anything that is in view be that buildings or people, providing they (the photographer) are stood in the public domain and not invading anyone's privacy.
The police asked me if I wanted them to take any further action but I didn't want to start something that might have recriminations in the future.

It's a very fraught subject and this is the first incident I've experienced regarding what we as photographers can take photographs of.  I looked on the internet and all sites repeat what the police said, the Amateur  Photographer magazine's site however publishes a very handy download that you can print and use as a handout to anyone who approaches you to object to your taking pictures, I have included an image of it here. 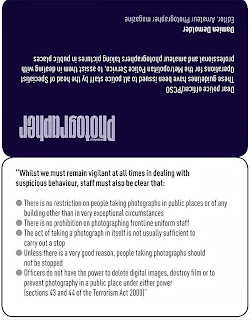 Here is a link to the site if anyone wants to obtain this useful card
http://www.amateurphotographer.co.uk/photo-news/535586/uk-photographers-rights-print-them-out-and-keep-them-handy

23rd November 2013.
Since posting this item the incident has played on my mind, it's now several days since it occurred and although I know I was in the right, and can legally continue taking photographs in the public area, I'm becoming increasingly nervous about taking my camera into situations where I may be challenged.  My main interest in photography is architecture, buildings (especially shops) boats and people.  I have to be honest and say that I'm considering giving up photography if these sort of situations are likely to happen more frequently.
Posted by David Bennett at 23:47