My operation was carried out in Hull Royal Infirmary and, as it's on the opposite side of the Humber Estuary, I had a "dry run", a few days before my operation, to familiarize myself with the roads and parking.

It was a nice day so after finding the hospital we went back to the Humber Bridge Country Park to have dinner and followed that with a walk down to the bank of the Humber at Hessle on the Yorkshire side of the Estuary.

Since my visit here we have had the "Great Tidal Surge" along the east coast and it caused severe flooding,
especially along the Humber Estuary and as far as 40 miles inland along the River Trent.  Some of the scenes shown here will have been flooded. 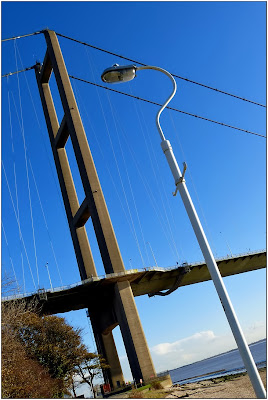 More pictures to follow in Part 2 of this series.

All pictures taken on a Panasonic FZ150 camera.
Posted by David Bennett at 15:37